Jonathan Almanzar always thought it would be a good idea to serve chicken nuggets on a cone. He went around telling everyone about the idea. While most people told him it was a good idea, nobody took it seriously.  When Jonathan told Josh about the concept, he was upbeat, enthusiastic and took the concept very seriously. Unlike other people he had shared the idea with, he immediately encouraged Jonathan to get down to turning the idea into a business. At that time even their wives were skeptical. But they pushed the idea and it was obvious early on that they had something with the Chick N Cone idea.  In a short time, Chick N Cone became a resounding success and was even featured on various blogs, the Cooking Channel amongst other platforms. 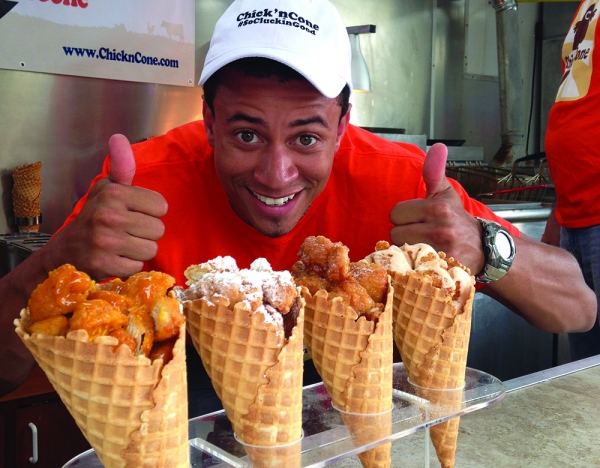 Chick ’n Cone’s orange truck has become a popular sight for many who love the idea of having chicken nuggets on a cone.  It has been a quite a success in attracting hordes of people looking to try out its new and exciting menu options.  The orange truck is popular for its chicken hand breaded chicken tenders served on a homemade waffle cone. They also have “Clucked Up Fries” which include sweet potato and Belgian fritas. All these are served with some of their signature sauces which include “Cinna-Maple”, “Yella BBQ”, “Kick’n Ranch,” and a wide selection of seasonal sauces. The food truck serves coca cola products for those who need a drink to wash down the delicious foods on their menu.

Chick ’n Cone also offers catering services. Anyone looking to organize a party or an event for gatherings ranging from 50 to 1000 people can hire one of their orange trucks to serve food during the event. The food is served at discounted prices per person. All the delicious foods on the menu, including the fries and sauces, will be available for people attending your event.

Chick ’n Cone is a fun and exciting food truck franchise that is already creating a buzz on various platforms online and on TV. The food truck was featured on the cooking channel’s “Carnival Eats”. Carnival Eats is a program that features delicious foods you can find on festivals and carnivals. The show has been running for two years and showcases carnival delicacies from around the globe.

The Chick ‘n Cone food truck idea is quite environmentally friendly. Some statistics suggest that half of all street litter comes from fast food outlets. The problem comes from the fact that fast foods require packaging. By serving chicken on a cone, they have eliminated the problem of litter from food outlets and are helping to keep our streets clean.

Meanwhile the co-owners Josh and Jonathan say that they want to be a chicken empire. They hope to expand their franchise to 49 states. They are seeking applications from franchisees who are interested in becoming part of the chicken empire, something they hope to achieve in the next five years.

How to Franchise My Business

This may take a second or two.